The impact of Swedish clothing consumption 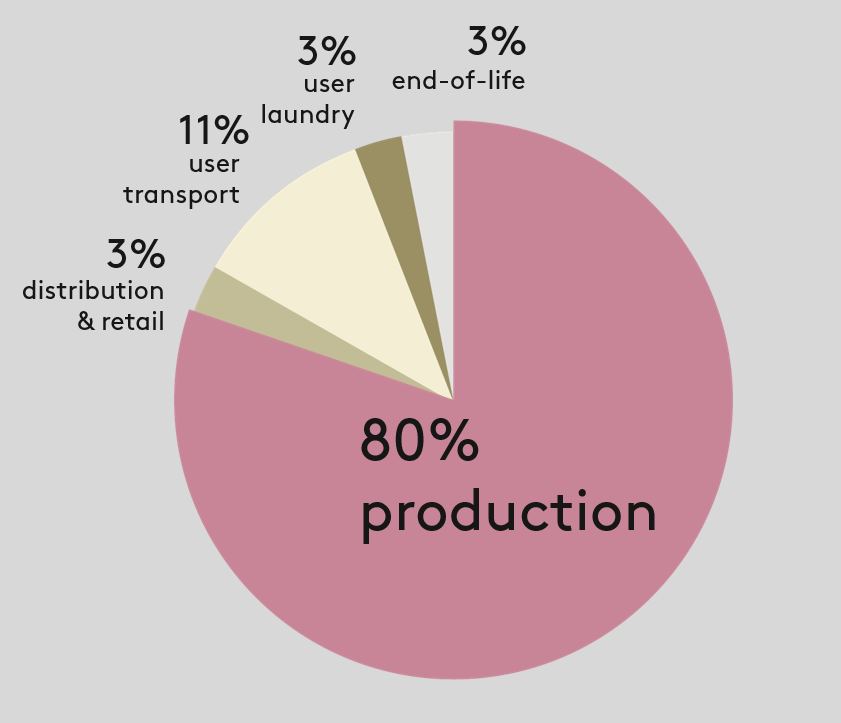 80% of the climate impact of Swedish clothing consumption stems from the production phase. In other words, most of the impact happens before the garments even hit the racks. Yet, both producers and consumers can help reduce the impact through behavioral change and technical production improvements.

New and updated life cycle assessments, calculating for all Swedish clothing consumptions, paints a clear picture of what changes are needed. Prolonging the active lifetime of a garment by two, that is using the garment in its originally intended form twice as many times compared to average, will decrease the climate impact by 49%. For example, on average a t-shirt is used 30 times and washed 15 times. If this t-shirt is instead used 60 times the climate impact can be cut in half.

Prolonging the lifetime by two and producing the garments using solar-powered energy means a reduction by 67%. Adding to the equation a consumer that bikes or walks to the store instead of taking the car means a total impact decrease by 78%. This reduction in climate impact demands a systemic change for consumers and producers, but it is possible.

Several interventions for reducing the environmental impact of clothing were explored in this new report, in isolation and in combination. Dr. Sandra Roos of RISE highlights that “What is measured is improved.  Knowing the impact is the first step to reducing the impact.” Measuring the impact also identifies which changes will have the largest positive influence and therefore should be prioritized.

Longer use of garments was found to be a very effective intervention – twice as many uses per garment lifecycle eliminated almost 50% of impact regardless of impact category. Solar-powered production reduces climate impact by between 27% and 44%, depending on garment, and walking to the store instead of taking a car determines roughly 12-24% of climate impact. In contrast, lowering the washing temperature had negligible influence on results when average Swedish electricity is used. Replacing cotton with, for instance, forest-based fibers such as viscose and lyocell can reduce the water scarcity impact of a cotton garment with about 90%.